One of Northern’s stations has become a colourful knitted work of art.

A yarn bombing installation has been created in partnership with Friends of Batley Station, with the help of local community and schools and it's all you needle to see this weekend.

Guided by knitting designer Sandra Nesbitt, members of the public have covered stone pillars, bollards and fencing to create a train, a traffic light design and colourful kaleidoscope patterns.

Volunteers were recruited to knit squares in rainbow colours featured in the “Batley T’Rainbow” installation at the front of the station.

Children from four local Batley schools have created a mosaic of bright rainbow squares from felting, recycling fabrics and weaving.

Project organisers at the Woven festival, which is funded by Kirklees Council, worked in partnership with the Friends of Batley Station to complete the yarn bomb as part of this year’s festival.

This year’s Woven festival will take place from June 5-27 and will launch with the unveiling of a spectacular, woollen, rainbow coloured yarn bomb of Huddersfield Train Station on the opening weekend.

Tony Baxter, Regional Director at Northern said: “We are pleased to be able to support Friends of Batley station with this project and the installation looks fantastic.  Northern is extremely fortunate to work in partnership with so many community groups who give their time to enhance the rail environment for our customers and all local people.”

The “Batley T’Rainbow” project was installed on June 11, which is International Yarn Bombing Day, and it will be unveiled to the public on Saturday, June 12, which is also Worldwide Knitting in Public Day.

It is part of the Woven festival taking place across Kirklees, thousands of rainbow coloured squares are also set to be installed on the historic pillars in front of Huddersfield train station knitted by volunteers locally, nationally and internationally.

Gwen Lowe, Chair at Friends of Batley Station said: “When I heard about this wonderful woven project happening at Huddersfield railway station I immediately thought, we should join in at Batley Railway Station. Woven is a celebration of innovation in textiles across Kirklees, and resonates for us in particular, as Batley is famous for the shoddy industry – the remanufacturing of wool.

“During these difficult times it’s great to bring back colour into our lives. My thanks to all the Woven team for bringing Batley our very own Batley t’rainbow!” 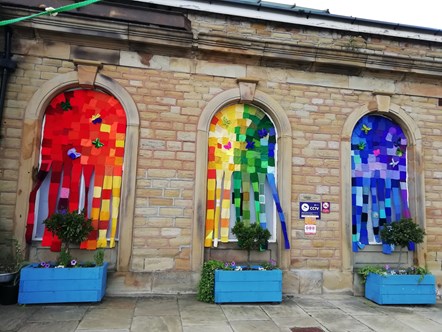