Remembrance events are to held across the network on Thursday 11 November – and on Sunday – with customers and colleagues from the rail industry joining Northern staff in remembering those who gave their lives.

Last week Northern also held the annual Poppy Appeal at Manchester Victoria Station with Northern staff – and some special guests - take to the station to raise money for the Poppy Appeal.

Singer Martin Ward entertained passengers passing through the station and there were performances from Chetham's School of Music.

Money was raised at the station for the Poppy Appeal and for those who couldn’t make it to Manchester Victoria, donations can be made via the British Legion’s website.

Northern is also offering complimentary travel this weekend – and on Thursday 11 November – across the entire network for service personnel.

Those wearing an armed forces uniform or carrying a military ID card, as well as cadets in uniform and veterans who display valid identification (such as the MOD issued Veteran's Badge) will be entitled to free travel on all Northern services.

The hundreds of licensed poppy sellers, who have been volunteering in the lead up to this weekend, will also be able to take advantage of the offer.

Elsewhere on the network Northern staff and community groups will pay their own tributes to the armed forces: 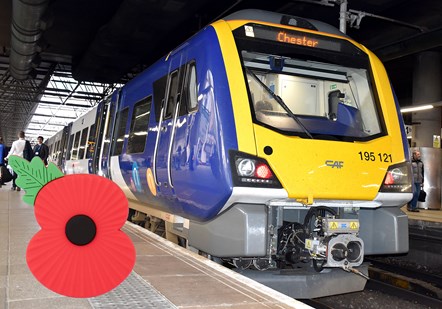