Despite a ‘near miss’ involving actor David Jason, one of Northerns driver managers has reached a 35-year milestone working in the rail industry.

Now Lead Driver Team Manager based at Manchester Piccadilly, Steven has loved every minute of his career.

A stand-out moment involved filming with a crew from ITV’s detective drama A Touch of Frost.

The popular show was filming at Longsight depot when Steven was asked to be the train driver who comes very close to ‘running over’ David Jason in his role as Detective Inspector Jack Frost as he walked along the track.

Steven worked with the actor and his stunt double, and the footage can be seen in Benefit of the Doubt aired in 2001.

Steven said: “It was a wonderful day and one of my favorite moments through the years, David Jason was very friendly, and the crew were great, and I stayed to watch the rest of the filming.”

It is just one of stories he has from his days working for Northern after starting as a Youth Training Scheme (YTS) trainee.

Through the scheme he was given a thorough introduction to life on the railway.

“The course gave us a general overview of railway operations and I worked small stations, big stations, red star parcels and even the telephone exchange,” Steven said.

“One job I used to find funny was they would get two of us to go out on a train with a huge metal safe on wheels and we would sit in the guards van, and the station staff would bring out the last few days takings in a small bag that was sealed with wax, and we had to drop them in the safe.

“To this day, I still don’t know how much money we were wheeling around.”

Steven was then asked to become a Relief Drivers Assistant – which involved helping with various tasks from pulling points and uncoupling or coupling engines before training as a driver.

The job took him all over the country before he was promoted to Instructor Driver and began training others. He is now the Lead Driver Team Manager.

He said: I’m always proud of the trainees when they qualify to be drivers. It’s rewarding to see trainees progress from knowing nothing about the railway to driving the trains by themselves.”

“I have loved my job from day one and as my career progressed the job just came naturally to me. I always enjoy coming to work. I love the team of people I work with; we are all cut from the same cloth and we just know how to operate.”

To read more about a career at Northern or to apply for available roles, visit www.northernrailway.co.uk/careers

Main image: Steven Lloyd with driver Robert Francis before he sets off on his first solo drive 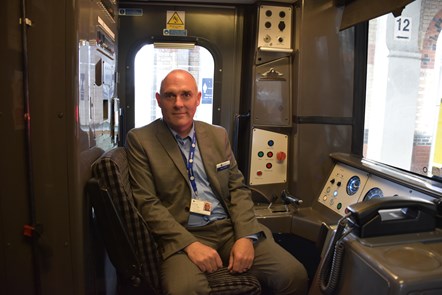