NHS heroes in Blackpool received a small boost over the Easter weekend thanks to staff from Northern.

The initiative started out as a joke remark from Sarah Lord and Andrew Smith, both Depot Shift Managers at Northern’s Blackpool depot, who asked colleagues for a free Easter egg.

The joke quickly escalated, and the eggs started to pile up, not just from depot colleagues but across Lancashire and Cumbria  as word got around.

Requiring quick thinking, the team ‘hatched’ a plan to donate the eggs to NHS staff locally including Blackpool Victoria Hospital Ward 26 and the Brian House Hospice.

Sarah said: “We are gobsmacked how a throwaway joke grew into something so big and became an opportunity for Northern colleagues to say a small thank you to those helping others.

Sarah added: “It’s super hard times for everyone and this turned into something so positive.

"We are really grateful to our colleagues for donating and we’re delighted to do our small bit to help those heroes in the NHS.

"The feedback shows that it was well received and we are hoping to make it an annual event and aim to make it even bigger next year.” 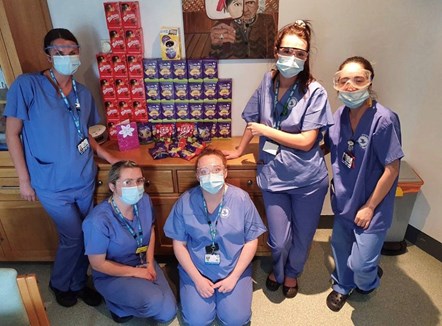