Northern, part of the Arriva group, has been celebrating another great year of Community Rail Partnerships following the annual ACoRP Community Rail Awards held at the Floral Hall in Southport.

Among the 14 winners was Brian Haworth of Community Rail Lancashire, who won the Involving Young People award for “Rose Grove Revived and the Adventures of Small Fry”.

“All Together Now”, by Community Rail Lancashire, Blackburn with Darwen Borough Council and Northern, also received recognition, as did the “Rail to Trail” project with the Leeds-Morecambe Community Rail Partnership and the Skipton Rail User Group. Geoff Mitchell was also successful in the Essence of Community Rail photo award.

Neil Buxton, General Manager of ACoRP, said “We would like to congratulate all the winners. They are all very well deserved! We would also like to acknowledge all the runners up and shortlisted projects.”

Alex Hynes, Managing Director for Northern, said “Thank you to ACoRP for organising a great event, and congratulations to all the winners. I am very pleased to see so many of our community rail groups recognised, as they do a wonderful job throughout the year.”

More than 400 guests attended the gala dinner and helped to raise £1724 during the evening, with a range of great prizes being donated by several attending organisations. Alzheimers Research UK and Cancer Research UK are set to share the funds.

Full details of all winners and runners up can be seen on the ACoRP website www.acorp.uk.com. 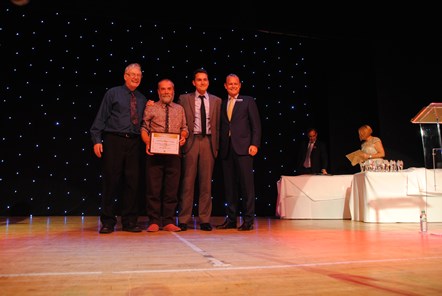