Following the close of entries on Wednesday 14 August, this year’s Betfred Super League Grand Final mascot competition, in partnership with Northern, has seen a 431% increase in entries compared to 2018.

The competition provides the chance for one boys and one girls side between 7 and 12 years old to walk out with the Grand Finalists at The Theatre of Dreams on Saturday 12 October.

Last year saw Wigan St Patricks and Wath Brow Hornets have the experience of a lifetime which included complimentary team travel to the match, a behind-the-scenes tour, and a bespoke club kit for each mascot who walked out alongside the stars of Super League.

For 2019, all the entries received had been shortlisted at random to 24 community teams , the winners and runner up prizes were drawn at the DW Stadium on Friday 16 August, before Wigan Warriors beat Warrington Wolves in a repeat of last year’s Grand Final. The outcome of the draw can be seen in the video above.

Joanne Morley, Head of Sales and Marketing at Northern, said: “We are delighted to be supporting community rugby to give youngsters the opportunity of a lifetime and be mascots at the biggest match in the Betfred Super League calendar.

"Last year’s winners thoroughly enjoyed the experience and this year will be just as amazing. There are great runner up prizes up for grabs too, this really is a fantastic competition to enter. We wish the best luck to each team that entered and will be watching the draw in anticipation to congratulate the winning teams.”

Rochdale Mayfield U9 Boys & That Heath U12 Girls 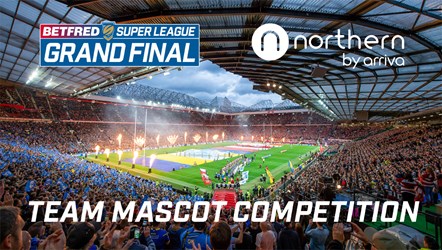