Community groups from Cumbria have been recognised for their work and commitment at a prestigious national awards ceremony.

Community groups from Cumbria have been recognised for their work and commitment at a prestigious national awards ceremony.

The groups who have worked in partnership with Northern to transform Workington station.

The main aim of ‘The Rails Which Circled the World’ project was to highlight the historical importance of rail-making to Workington. The town’s Moss Bay Steelworks was once proudly responsible for producing vast quantities of steel rails which were shipped all over the world.

Community Rail Cumbria and Workington Focus Group wanted to create an outdoor art exhibition that celebrated the town’s heritage and rich social history and enhanced other elements of the transformed station including the return of its original railway colours, black and white signage, heritage benches, and artefacts displayed on the platforms.

A total of 17 seven-foot-high panels were unveiled a launch event in May 2021.

“We are delighted to receive this prestigious award. We would like to thank Laurence Hilland, who wrote the original project plan, as well as Northern, Direct Rail Services, Cumbria County Council, Workington Transport Heritage Trust, Community Rail Network, Cumbria Railways Association and the Helena Thompson Museum.

“This project would not have been possible without drawing on the rich history of Workington. We are pleased to be able to showcase all the industries that made Workington a world industrial leader and show younger generations the fantastic industrial history of the area.”

"It was really pleasing to be shortlisted for and win this award, it really puts our town on the map.

“It encompassed everything that we wanted to achieve by showing off both the railway heritage and the towns rich industrial past.

“It could not have been achieved without the support of Jane Murray and Martin Keating from Northern plus the dedication from my right-hand man on the Station Adoption group, Cameron Bragg."

Northern supports over 20 Community Rail Partnerships and many more station adoption groups, and the breadth of projects and community engagement activity taking place were highlighted at this year’s awards ceremony.  The awards showcased how groups supported their communities through the pandemic, are encouraging greater awareness of climate change and sustainable travel options.  Education and awareness of a range of societal issues including Hate Crime were among other projects recognised.

“Our community partners are the heartbeat of the railway and we’re extremely proud to work closely with them to deliver such wide-ranging positive impacts for the north of England.

“Workington station looks fantastic and the wall panels provide an artistic and educational insight into the town’s rich history.

“Community Rail Cumbria and Workington Focus Group have excelled themselves and I want to thank them for their extremely proactive, creative and engaging project.  I am delighted that their efforts and achievements of have been recognised.

“Well done and thank you to all the volunteers for their positive contribution we look forward to continuing to work with you in 2022.”

Groups across Northern’s network either won or were placed in a total of 14 categories with winners representing stations across Cumbria, Derbyshire, Lancashire and Yorkshire. 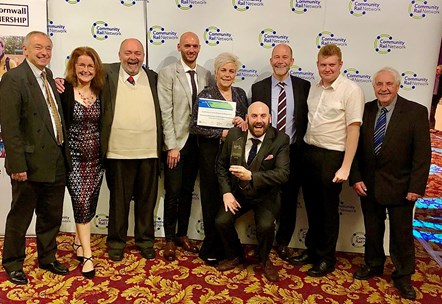